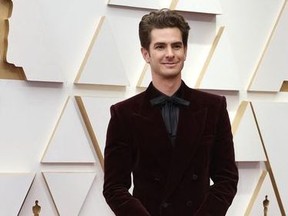 Even Andrew Garfield couldn’t get over Will Smith’s smack attack on Chris Rock at Sunday night’s Oscars.

The Academy Award-nominated star went viral this week after a Everytime he’s nominated for best actor, something big happens at the Oscars,” one person commented. “2017 – wrong announcement of best picture; 2022 – Will slapping Chris.”

“Andrew needs an Oscar for so many things but he should get it with this mimicking alone,” another added.

Woman tracks boyfriend to strip club, dumps him on stage