New targets reverse the rollbacks put in place by Trump, are meant to prod automakers to build more efficient cars 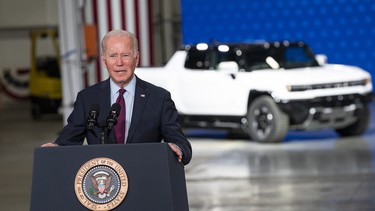 President Joe Biden delivered remarks on the bipartisan infrastructure law and the future of electric vehicles at the grand opening of the General Motors Factory ZERO in Detroit, Michigan on November 17, 2021. Photo by Dominick Sokotoff /Reuters

The National Highway Traffic Safety Administration (NHTSA) is announcing it will boost fuel efficiency requirements by 8 per cent for both the 2024 and 2025 model years; and 10 per cent in 2026. That’s slightly more aggressive than the agency’s proposal outlined in August.