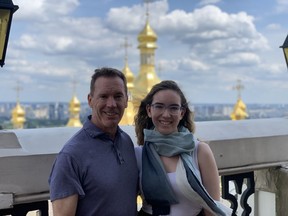 Dale Wishewan and his daughter, Sienna, during a 2019 trip to Kyiv. Photo by Dale Wishewan

Dale Wishewan had just landed in Palm Springs, Calif. It was hot, sunny, perfect out, really, and the plan was to “decompress,” play a little golf and get away from it all. But the chief executive and founder of Booster Juice Inc., the Edmonton-headquartered smoothie-slinging juggernaut that has grown from one to 410 stores in a bit more than two decades, was finding he couldn’t get away from the “things a person sees.”

Such as young Ukrainian mothers, often with a child in the crook of one arm and another kid at their feet, a single bag, and maybe $50 in their pocket arriving at a humanitarian aid centre near the Polish/Ukrainian border. Wishewan was among the volunteers there to meet those women and children in March; a Canadian tycoon gone anonymous, and thanks to the Ukrainian-speaking grandparents who raised him in a tiny farming community northeast of Edmonton, one capable of asking in his “bad” Ukrainian if the refugees needed something to eat.

“After what, what — well — I found the trip to be extremely emotional,” he said from California in a halting voice that betrayed the depth of those emotions.

Russia’s invasion of Ukraine has struck at the heart of most people, leaving us grappling on an individual level with how best to help. In the face of the unthinkable, what can be done? For the majority, the answer is to donate money to a charity and pray it reaches those in need.

Wishewan had a similar impulse in the early days of the war, and he launched a fundraiser through his stores, offering to match customer donations up to $200,000. It was a start, he thought, but there was a nagging feeling that he needed to do, well, more. That he needed to actually “go there,” and roll up his sleeves and do what he could to help.

Of course, it helps that he runs a big company and he has connections, including a longstanding friendship with Jason Johnson, a former Edmonton Elks (née Eskimos) backup quarterback.

Johnson, like most Canadian Football League players, had a day job away from the field, in this case, in Booster Juice’s marketing department. After retiring from the game, he founded an Emmy-award winning boutique production company that has done work for Medair, the Swiss non-profit that operates in humanitarian disaster zones, distributing medical supplies, aid and expertise.

Wishewan offered up his services to Medair, but the organization hesitated, since it wasn’t yet set up on the ground in Poland. To which the Albertan replied, “all the better,” before jumping on a plane on March 14. His daughter, Sienna, a third-year student at the University of Victoria and aspiring human rights lawyer, hopped aboard with him.

“I wasn’t looking to be hosted — we were looking to help — and we weren’t going to take no for an answer,” he said. “The Ukrainians could have been any one of us, living a normal, everyday life, and all of a sudden it gets flipped upside down. Can you imagine?”

Imagine being, say, a father with young children and a good technology job, learning how to handle a weapon while his wife and young children make a run for the border and the great unknown.