A quirky hot hatch with an entertaining personality 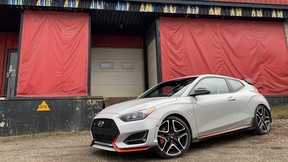 The world is full of interesting and surprising acronyms. For example, did you know that TASER — those takedown stun guns which are the darlings of crime drama shows — actually stands for Thomas A. Swift’s Electric Rifle? It’s true. Go look it up. We’ll wait.

See? Wild, huh? The automotive world is awash with acronyms as well, of course, including the letter ‘N’ which Hyundai has chosen to denote its sportiest and roartiest of vehicles. The consonant stands for an area known as Namyang, a South Korean locale where the company’s go-fast research and development centre is sited. It’s comprised of an entire campus of buildings, plus test roads which cover more than three million square meters of land. With top-flight researchers and facilities on hand, Namyang serves as a think tank for the development of high-performance N vehicles.

For 2022, Hyundai has simultaneously cast a wider and narrower net with their Veloster offerings. Allow us to explain. Only the hot-hatch N trim, with its 275 horsepower and 260 lb-ft of torque, is available this year. The base four-cylinder and non-N Turbo models have vanished. However, they widened the N’s appeal by adding our tester’s excellent eight-speed dual-clutch automatic, new last year and a sorely needed option for those who can’t (or don’t wish to) drive a manual transmission. As much as it pains your author to admit, there are conditions in which a snappy shifting dual-clutch is preferable — such as during rush hour on the Gardiner.

Fortunately, this transmission is a good’un, employing two clutch assemblies — one for odd gears and one for even and reverse gears. The clutch actuator assembly utilizes a lightweight electric motor-driven system for greater efficiency, explaining the optimized shift response, with a bonus of compact packaging. It responds to the crisp click of a shifter paddle or yank of the selector with an instant gearchange and, depending on what driving mode you’re in, a snap, crackle, pop of the exhaust thanks to its high-flow design and variable actuator. It is endlessly entertaining and evokes the sort of giggly delight the dour (but eminently capable) Golf R would be wise to copy. Veloster N’s power delivery suits its personality, with all of its torque ready and raring to go by just 1,450 rpm. In full-attack N Mode — heck, even in Sport — it’s like an excited puppy pulling on its leash.

However, the N could learn from the Golf R when it comes to the number of driven wheels. Yes, it would be a herculean task to fit all-wheel drive under the Veloster since it was never designed to accept such gubbins, and the chances of Hyundai sinking that much money into what is decidedly a niche model is slim-to-none. That won’t stop us from complaining this Veloster N often fought to put down all its power thanks to a relative lack of traction, especially from a dead stop, though in fairness we must note the 35-series Pirellis do not cotton to sub-zero December temperatures. Besides, if you want all-wheel drive, that’s what the new Kona N is for.

Another acronym that deserves our attention in this car? NGS — which stands for N Grin Shift. Before you dismiss this as a hackneyed marketing ploy on the part of Hyundai, know that mashing this steering wheel mounted button permits the car to overboost its turbocharger for 20 seconds, increasing peak torque by seven per cent from 260 to 278 lb-ft. The DCT’s shift mapping changes dramatically as well, putting new life into the phrase “drop a gear and disappear.” There’s a five minute refractory period before the system lets you overboost the engine again. Go ahead and use that time to let the endorphins ebb and have a smoke.