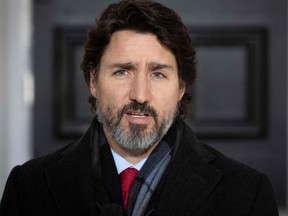 Bill C-10, the legislation put forward by the Trudeau Liberals to police the internet, puts most relevant online content under government supervision and regulation. Photo by LARS HAGBERG /AFP via Getty Images / Files

Canada is currently engaged in a national conversation about COVID-19 rules, with many people urging governments across the country to drop all of the rules like the United Kingdom, and other countries, have done.

It’s taken up quite a lot of oxygen among politicians, the media and the public. All eyes are on the protests.

It’s pretty clear by now that Prime Minister Justin Trudeau wishes to make things look worse than they are so he can stoke fear and division among Canadians. As the old saying goes, he’s not letting a good crisis go to waste.

But that’s not all that’s happening. Trudeau and his Liberal government are using the current national tensions as a smokescreen to let them slip in unpopular pieces of legislation.

The government is now expected to claim that this is a new and improved piece of legislation, addressing everyone’s concerns.

Professor Michael Geist, from the University of Ottawa, is the country’s leading expert on these issues. He says that it’s just not true that all of the problems are now gone.

“Indeed, for all the talk that user generated content is out, the truth is that everything from podcasts to TikTok videos fit neatly into the new exception that gives the CRTC the power to regulate such content as a “program”,” Geist explains in a blog post that’s appropriately headlined “not ready for prime time”.

Basically, the bill means the Canadian Radio‑television and Telecommunications Commission will be granted permission to regulate a lot of social media content created by Canadians.

We shouldn’t be doing this and it’s not needed. Full stop. The legislation is a solution to a problem that doesn’t exist and Canadians should oppose it as much as they did its precursor.

As if this isn’t scandalous enough, it’s quite something that Trudeau would try to slip this through when he did.