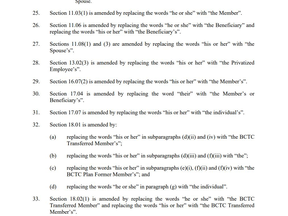 An excerpt of one of hundreds of orders in council being enacted in B.C. to purge “outdated gendered language” from all 152 years of provincial legislation. These particular changes were ordered made to the British Columbia Hydro and Power Authority Pension Plan. Photo by Government of British Columbia

This week, the government of B.C. Premier John Horgan announced that it had gained ground in its multi-year quest to delete “outdated gendered language” from its official laws and statutes. Bureaucrats had found and erased another 741 instances of terms such as “father” “aunt” or “herself,” adding to 600 found the previous year.

And it’s not just male and female pronouns, B.C. is also purging its lawbooks of other terms it deems objectionable. For instance, the Missing Persons Act will now carry the term “substance use” instead of “substance abuse.”

The whole effort is quite an operation. There are roughly 800 laws in British Columbia, ranging from the Motor Vehicle Act to the Dike Maintenance Act. In addition, many of those laws come with attached regulations that can run several hundred pages in length. The Forest Act alone comes with 47 tacked-on regulations, including one that specifically addresses Christmas Trees.

And it is currently the job of a bureaucrat or bureaucrats to comb through all of these and remove absolutely any word or phrase that could potentially infer the existence of two genders.

While some of B.C.’s older laws use only male pronouns such as “he” or “him,” most incorporate women through the use of the terms “him or her” or “he or she.” But according to advocates quoted by the B.C. government, these terms don’t allow non-binary British Columbians to “recognize themselves in the law.”

Most of the deletions involve replacing mentions of “him and her” with either passive language or a neutral term such as “the employee” or “the parent” (“aunt” is replaced by “the parent’s sibling” in the Family Law Act, for instance). A regulation relating to property ownership referred to “both sexes.” This was deleted and replaced with “persons of any sex or gender.”

One of the more elaborate changes comes from the Milk Industry Standards. Whereas dairy workers were previously required to “wash and dry his or her hands,” they must now “ensure that the bulk tank milk grader’s hands are clean by washing and drying them.”

B.C. is the only government in Canada to attempt to do this, which is something they’ve bragged about. Given the sheer volume of legal documents that have accumulated over Canada’s 155 year history, there are tens of thousands of statutes, contracts and orders laced with outdated terms such as “Indian” or “buggery.” The classic example are B.C. land title covenants that ban a property’s ownership by “Asiatics.” Although the provision is now rendered moot by any number of anti-discrimination laws, the text can still be found on many early 20th century land titles.

Last year, the federal government spent more than $600,000 paying online “influencers” to promote government policy. This included kicking money to Instagram stars to talk up “staycations” or encouraging Canadians to get the COVID vaccine. Reporting by CTV identified one such government-sponsored post on the feed of Instagrammer Sukhman Gill, which contained this