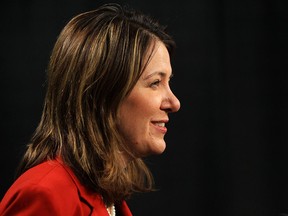 Former Opposition and Wildrose leader Danielle Smith is re-entering provincial politics with an eye on the United Conservative Party leadership.

Smith told Postmedia on Thursday she will put her name forward to become the UCP nominee for Livingstone-Macleod in next year’s general election, with an official announcement planned for Friday. If Premier Jason Kenney loses an upcoming leadership vote, she said she will throw her hat in the ring in the ensuing race for the party’s top job.

“I’ve had lots of people approach me saying when are you gonna get back into politics, and specifically asking me if I’d put my name forward here, and so I talked with my husband and we agreed, gonna give it one more try,” said Smith.

She said she is returning to politics because she is upset the UCP cancelled its April 9 general meeting and moved the leadership vote to mail-in ballots. She called for the party to reverse the decision and either hold the vote in person in Red Deer or set up polls in all major population centres to allow people easy access.

She also noted she is angry with how Kenney has characterized people in the province as “lunatics” or bigots based on their views around COVID-19 and public health mandates.

“If me announcing allows people to think that I might be a leadership candidate, then fair enough, I’m in,” said Smith. “I will put my name forward for leadership as well. But that really is a decision that’s up to members, and if members choose to keep the current leader then I’m quite happy to make my voice heard from the backbench.”

She would be joining a battle that has largely been seen as Kenney against another former Wildrose Party leader, Brian Jean, who recently won a byelection as the UCP candidate in Fort McMurray-Lac La Biche.

Smith has a long history in Alberta politics, beginning with a nearly year-long stint as a Calgary Board of Education trustee in the 1990s. She would later become the leader of the provincial Wildrose Party and elevate the party to official Opposition status.

Her time with the Wildrose ended in 2014 when she crossed the floor and joined the Progressive Conservative party, led at the time by Jim Prentice. She would go on to lose the PC nomination in her home riding in 2015 before the region eventually elected a Wildrose member back into the legislature.

Following her time in politics, Smith hosted a daily talk radio show on Corus Radio for six years and has regularly written columns for Postmedia papers, including the Calgary Herald. She left Corus last year, decrying what she perceived as restrictions on free speech, saying there were topics that were “unchallengeable.” She has since been the president of the Alberta Enterprise Group.

While on the radio, she regularly criticized Kenney’s handling of COVID-19. She also apologized early on in the pandemic after tweeting false claims about COVID-19 treatments.