On May 24, 2021, Mosley’s housekeeper and neighbour discovered a note on his bedroom door warning: “Do not enter, call the police.” 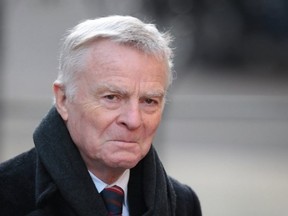 Colourful Formula 1 boss Max Mosley fatally shot himself after learning he only had weeks to live, a British inquest heard.

Mosley, 81, had been the chieftain of auto racing’s governing body for 16 years. He killed himself last spring at his London home.

On May 24, 2021, Mosley’s housekeeper and neighbour discovered a note on his bedroom door warning: “Do not enter, call the police.”

Inside the room, police found Mosley’s lifeless body suffering injuries consistent with a gunshot wound. A note on his bedside table was soaked in blood and barely legible.

“He had an aggressive form of cancer and had been down. He said he’d had enough,” neighbour Henry Alexander told the inquest. “We had been talking about the upcoming operation and he said he couldn’t face it.”

The detective who discovered the body said Mosley’s doctor informed him that “the consultation was he may have two to three weeks left and this could have been the reason why he killed himself.”

There was no sign of anything suspicious or any kind of forced entry, the officer added.

Dr. Christopher McNamara, a consultant hematologist, said Mosley was diagnosed with a high-grade lymphoma and he had recommended chemotherapy for prostate cancer. But it didn’t work.

“Over the next nine months, he tried a range of different treatment options — some of these were prescribed by myself and undertaken by Mr. Mosley against my advice,” the doctor testified.

“Max had a terminal illness and accepted this would not be cured.”

He added: “Mr. Mosley had expressed ideas of committing suicide to myself and other colleagues and had been referred to appropriate colleagues. He never expressed a plan of doing this and always said the problem was that his wife would not accept this. He also indicated his affairs had been in order.”

While his doctors liked Mosley, he carried a lot of baggage. His father, Sir Oswald Mosley, was a Nazi sympathizer and leader of Britain’s fascist party before the Second World War. Nazi dictator Adolf Hitler attended his parent’s wedding.

The battle for your toilet paper is on