‘I would hope that we could do it before 2025. Realistically, I would like everyone to have clean drinking water tomorrow,’ the indigenous services minister says 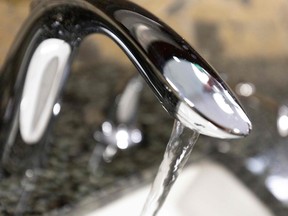 Tap water is seen in this photo illustration on Aug. 19, 2019. Photo by ALASTAIR PIKE /AFP/Getty Images

OTTAWA — Indigenous Services Minister Patty Hajdu hopes Canada will be able to lift its remaining long-term drinking water advisories by 2025 — the year a deal between the NDP and the Liberal government is set to expire.

Hajdu has declined to put a firm deadline on the commitment since coming into the role last fall, saying there are many technical challenges with the task.

Prime Minister Justin Trudeau, when he was first elected in 2015, promised to end all long-term drinking water advisories on First Nations by March 2021. His government failed to meet that deadline.

Recently, Trudeau secured what appears to be an easier path for his minority Liberal government to accomplish some of its shared priorities with the federal New Democrats by entering into a deal with the party that would keep him in power until 2025.

By then, Trudeau, who is in his third term, will have been prime minister for a decade. Asked directly if the 34 remaining long-term boil water advisories could be removed by that date, Hajdu responded: “I would hope so.”

“Listen, I would hope so. It was a commitment that the Prime Minister made in 2015. I know that people were disappointed that we weren’t able to lift them all, and I was disappointed, too,” she said in a recent interview with The Canadian Press.

“I would hope that we could do it before 2025. Realistically, I would like everyone to have clean drinking water tomorrow.”

The lack of access to clean drinking water on reserves has been a blemish on Canada’s already troubled relationship with Indigenous Peoples.

Ensuring every First Nation has clean tap water is regarded as a crucial part of achieving reconciliation.

While that step remains unfilled, another one was taken thousands of kilometres away.

Around 200 Indigenous delegates who travelled to Rome heard Pope Francis apologize on Friday for the Roman Catholic Church’s role in operating residential schools, where thousands of Indigenous children were removed from their families and suffered abuse.

Ottawa was not involved with the delegation’s request, Hajdu said on Thursday. But she grew teary eyed when describing listening to Chief Willie Littlechild, a delegate and residential school survivor speak in Rome.

“I still get emotional when I think about the experiences of so many Indigenous people. It’s truly, truly hard to believe the burden of pain that families have carried.”

When it comes to eliminating long-term drinking water advisories, Hajdu says she has a plan to contact every chief in the 34 communities that are under such a notice, adding each has a work plan.

“It isn’t an issue of money,” she says, but rather one of logistics that vary depending on a community’s remoteness and its infrastructure, which can slow work down.

You may soon be offered a fourth COVID-19 shot. What’s known about second boosters?

You may soon be offered a fourth COVID-19 shot. What’s known about second boosters?