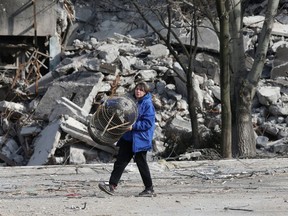 A local resident carries a cage while walking past an apartment building destroyed during Ukraine-Russia conflict in the besieged southern port city of Mariupol, Ukraine March 31, 2022. Photo by ALEXANDER ERMOCHENKO /REUTERS

There are several historical referents we should keep in mind about the Ukraine war.

First, no-fly zones. Lots of Westerners are calling for NATO aircraft to establish a no-fly zone above Ukraine to stop the Russian bombing of Ukrainian cities.

The United States never attempted a no-fly zone against either nuclear Russia or China during the Cold War – despite a long history of these countries supplying wartime enemies of ours. No nation wishes to risk Armageddon over the skies of a third party.

Second, regime change. There has been a lot of wild talk – from Joe Biden and various U.S. senators on down – about removing or assassinating Russian President Vladimir Putin to achieve “regime change” in Russia.