Tristin Hopper: Spell it with one y and you just may be on Putin’s side 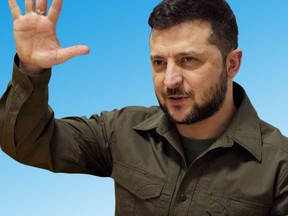 One of the most immediate linguistic impacts of the Russian invasion of Ukraine is that Western media stopped referring to the Ukrainian capital by its Russian pronunciation of “KEE-ev.” Henceforth, the name of the embattled city was pronounced the way Ukrainians do: “KEEV.” But it’s not just the capital; in the years that Ukraine was under Imperial Russian and then Soviet rule, all sorts of Ukrainian names got a Russian spin on them. Watch the Everything Should Be Better video or read the transcript below to learn more.

The same goes for the city’s English spelling. If you transliterate from the Russian name, you get this (Kiev). Do it from the original Ukrainian, and you get this (Kyiv). The same also goes for the name of Ukrainian President Volodymyr Zelenskyy. The Ukrainian way to spell his name is with two ys. The Russians drop one of the ys (Zelensky).

Lest you think this is some weird Eastern European thing, do you call this place (Quebec) “KAY-bec” or “QWAH-bec”? And is this “Klondike” or “Tr’ondëk”?