As much as the all-electric’s performance shines, its the cabin that really sets the tone 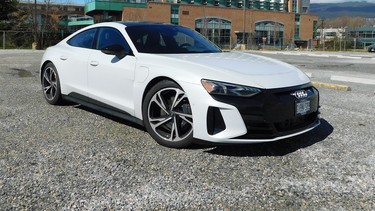 Now that I’ve had a few months of living with the Audi e-tron GT, I’ve come to really appreciate the interior design of the four-door sedan. Well, that and the fact I haven’t visited a gas station in 2022.

During the first month or so with the all-wheel-drive, all-electric grand tourer I was mostly focused on the performance attributes of the well-behaved vehicle, from its lightning-quick acceleration to its supreme handling. The benefits of that floor-mounted battery pack can not be understated, particularly in terms of creating a low centre of gravity that keeps the sedan pinned to the road and translates to very little body roll in tight corners.

Of course, this shouldn’t come as much of a surprise as Audi interiors have for years been, in my opinion, among the best in the auto industry. There’s a certain sophistication, and simplicity, to the controls, the gauge packages and the general cabin layout that just lends itself to first-class functionality with no compromise to tasteful design. And I’d argue that the e-tron line-up has taken that design language up a notch, particularly the GT model.

The two display screens — one viewed through the steering wheel, the other on the centre dash — can be tailored to your personal liking, such as having the navigation map right in front of you and comprehensive energy consumption information on the centre screen, or visa versa.

The flat-bottomed steering wheel features paddles shifters that control the three regenerative braking settings, and thumb-operated controls on each side of the Audi symbol centre provide infotainment scrolling options and volume controls. A small stalk off the steering column controls cruise control functions. Personally, I’d prefer this control to be operated from the steering wheel thumb controls, and find the stalk system to be woefully outdated. Seems out of place on such a cutting-edge vehicle. Back to that steering wheel: it’s meaty and a pleasure to hang on to, and is heated for those particularly chilly mornings.