Melanie Joly announced Saturday that she will visit Finland, Germany and Belgium. 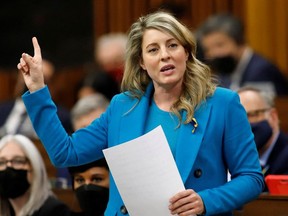 OTTAWA — Canada’s foreign affairs minister is travelling to Europe for meetings to address the response to Russia’s invasion of Ukraine.

Melanie Joly announced Saturday that she will visit Finland, Germany and Belgium.

Joly is to meet with her Finnish counterpart Pekka Haavisto in Helsinki, where she says they will work to strengthen the Canada-Finland bilateral relationship.

The pair is also to discuss ways to coordinate efforts on Arctic issues and to further support Ukraine.

While in Berlin, Germany Joly will attend the conference of the Moldova Support Platform where discussions will focus on assistance to Ukrainian refugees forced into that country as a result of the Russian invasion.

“The war in Ukraine affects us all, and we must work together with the international community to respond to Vladimir Putin’s egregious acts,” Joly said in a news release. “Ukraine’s security isn’t just important for Ukraine, but for the world.”

On March 8, Canada announced the renewal of its multi-year commitment to Operation Reassurance, the Canadian Armed Forces support to NATO’s assurance and deterrence measures in Central and Eastern Europe.