The second-row is first class all the way, the third-row is more like economy 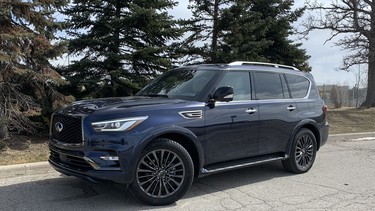 During my week with the 2022 Infiniti QX80, I had to make a trip to the airport to pick up my mom and aunt. They compared the QX80 to being driven home in a limousine. It’s not quite that long, but the QX80 might as well be a small plane — that will never take flight.

I’ve never piloted a plane, but I am often the pilot of vehicles. Even when not the pilot, I’m the stewardess who is frequently passing back snacks and drinks to impatient passengers.

If the QX80 is like a plane, the front seats belong to the pilot and co-pilot. The second row is for first-class passengers who can enjoy heated seats, and the squishy third row is undeniably economy, and I’m talkin’ the dreaded back row that’s right beside the bathroom.

I wouldn’t use the infotainment dial and buttons placed in the centre console, especially since I have my seat pushed forward a little more than average (I’m short), making it a bit uncomfortable to reach back for those controls. I appreciate that the QX80 gives the option of a touch screen, though the 12.3” screen is on a bit of an angle, tilting towards the front of the car. It’s odd, but it’s not a deal breaker.