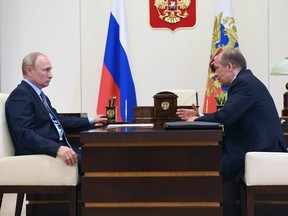 Putin is being blamed for obliterating the Russian economy and wiping out billions controlled by the oligarchic elite due to his invasion of Ukraine.

The Daily Mirror reports that the fifth column emerging around Putin wants Alexander Bortnikov, the director of the Federal Security Service and a member of Putin’s inner circle, as Mad Vlad’s successor.

Ukrainian intelligence sources told the Mirror that Bortnikov and Putin had a falling out after the tiny terror blamed him for “fatal miscalculations” in the military debacle.

“Bortnikov and his department were responsible for analyzing the mood of the population of Ukraine and the capacity of the Ukrainian army,” the directorate said.