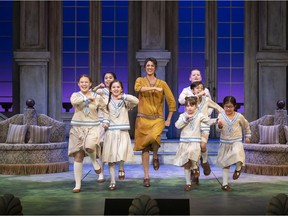 The popular production of The Sound of Music is one of the highlights of the upcoming Arts Club Theatre Company’s 2022-2023 season. Photo credit: Emily Cooper Photo by Emily Cooper /PNG

“I hope that our audiences find in this programming the Arts Club’s desire to embrace the identities and idiosyncrasies of our three venues: the size and scale of the Stanley, the warmth and intimacy of Granville Island, and the delight of the unexpected at the Newmont,” said Corcoran.

More new shows by local artists will see the stage at the Arts Club’s longtime waterfront home, the Granville Island Stage, starting with Mom’s the Word: Talkin’ Turkey. This latest instalment from the beloved Vancouver-based Mom’s the Word Collective will carry audiences through the holidays. Three other shows will follow, including the world premiere of The Cull, by Michele Riml and Michael St. John Smith, a biting new drama about old friendships, secrets, and survival. In addition, Corcoran announced three shows programmed for the Newmont Stage at the BMO Theatre Centre, including Redbone Coonhound, by Amy Lee Lavoie and Omari Newton, a hard-hitting new comedy and world premiere of a script co-commissioned as part of a Rolling World Premiere with Tarragon Theatre and Imago Theatre.

“We want to highlight the joy, tactility, and participatory nature that is unique to theatre. Patrons may recognize some familiar names and titles — a priority this season is to return as much work as possible to the many artists who had their livelihoods pulled out from beneath them two years ago,” said Cathie White in a statement.

Lea Salonga, coming to a Jollibee near you