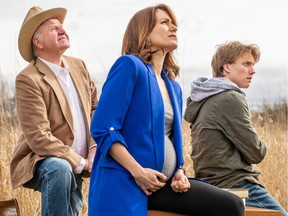 How the World Began

In the Pacific Theatre production of the 2011 play, Meghan Gardiner — of 2019’s Gross Misconduct and 2021’s The Boy in the Moon — plays Susan Pierce, a New Yorker newly transplanted to rural Kansas to teach science to high schoolers. She finds herself in hot water over an offhand reference to creationism as “gobbledygook.” The reference sets off her student Micah, who has just lost his parents to a tornado. Micah’s guardian, Gene Dinkel, tries to broker a truce between the two. Susan, who is pregnant, is dependent on the job for not only salary but health insurance.

“What I love about this play is that each character has their own prejudices and persuasions,” Rodgers said. “And yet our sympathies go back and forth between all three. You may go into the play as someone who believes in evolution. And you may be surprised with how much you sympathize with the young lad who is the creationist. The writing is so sophisticated.”