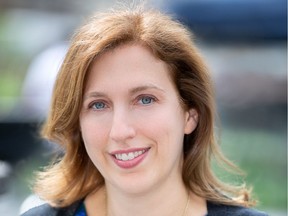 You don’t title your book People Love Dead Jews: Reports from a Haunted Present without expecting reaction. Award-winning American author Dara Horn says more than a few have offered opinions on the name; some pro, some con. Surprisingly, fewer in either camp than she expected.

A doctorate in Yiddish and Hebrew literature, Horn says stories about Jews are her “jam,” and that she has always pushed back against the idea that Jewish history is far too often defined from the outside-in. The author of five books that tackled issues around literature, language and custom figures she spent 20 years trying not to write her latest work. But there were always flags that a serious dive into the whole fascination with Jewish death versus existence was needed.

“I would frequently ask people at my public reading events if they could name three concentrations camps, which many could easily do,” said Horn. “But when I asked those same readers how many could name three Yiddish writers, there was nowhere the same response. The intention behind this was because the 80 per cent of the people murdered in the Holocaust were Yiddish speakers and part of a famously literary culture, the content of which nobody seemed to care about. Why do we care so much about how these people died if we don’t about how they lived?”