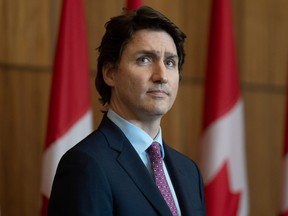 Justin Trudeau’s approval rating has plummeted following criticism of his handling of the Canadian trucker protests, including bringing in emergency legislation.

Ottawa, the capital, was brought to a standstill for three weeks and border crossings with the United States were clogged as hundreds of truckers blocked streets and highways in protest at COVID vaccine mandates.

A Nanos Research survey found that 47 per cent of Canadians said their impressions of Mr Trudeau had worsened over his government’s response to the demonstrations, while only 20 per cent said theirs had improved.

“What’s clear from the survey is that even though Canadians generally support what the prime minister has done, his personal brand has taken a hit as a result of the truckers’ convoy protest,” Nik Nanos, a pollster, told the Globe and Mail newspaper. “There’s no political windfall for Justin Trudeau coming out of implementing the Emergencies Act.”

In a survey by the Angus Reid Institute, a polling organiszbased in British Columbia, 65 per cent of respondents said that Mr Trudeau’s remarks targeting demonstrators had made a tense situation worse.

Ontario reports 795 people hospitalized with COVID-19, 253 in ICU on Saturday