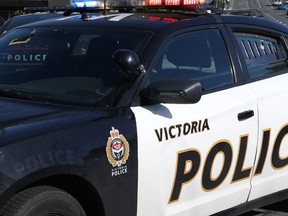 VICTORIA — In what might be the quintessential Canadian crime, a man on roller blades and wielding a hockey stick was arrested Monday afternoon for stealing a tuque off a woman’s head.

Victoria police were called to the area of Government and Belleville streets just after 1:30 p.m. for a report that a man on roller blades was hitting garbage cans with a hockey stick. A second report said the same man was causing a disturbance and hitting windows at businesses with the stick.