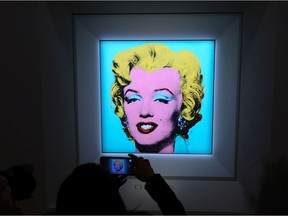 A guest takes a photo during Christie’s announcement that they will offer Andy Warhol’s Shot Sage Blue Marilyn painting of Marilyn Monroe at Christie’s on March 21, 2022 in New York City. Photo by Dia Dipasupil /Getty Images

NEW YORK — A portrait of actress Marilyn Monroe by 1960s pop icon Andy Warhol will go up for auction in May with an estimated value of $200 million, which would set a record, Christie’s announced on Monday.

The work, “Shot Sage Blue Marilyn,” “is poised to be the most expensive painting of the 20th century ever sold at auction,” said Alex Rotter, Christie’s chairman of 20th and 21st century art.