‘We need to ask ourselves whether more spending, more debt and bigger government are really what’s needed’ 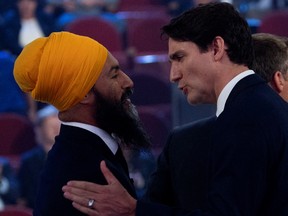 Prime Minister Justin Trudeau announced that his Liberal party and the New Democrats have agreed to form a quasi-coalition that would support the current government through to the end of its mandate in 2025.

“What this means is that during this uncertain time, the government can function with predictability and stability,” Trudeau said at a press conference on March 22. “We’re different political parties. We stand for different things. But where we have common goals, we cannot let our differences stand in the way of delivering what Canadians deserve.”

Trudeau cited the war in Ukraine and the prospect of slower economic growth in the year ahead as challenges for the current minority government, which relies on garnering support from other parties to pass legislation. The agreement is not quite a coalition since no NDP MPs will take up cabinet seats, but the New Democrats have agreed to support and help the Liberal caucus pass laws on policies for such things as  dental-care and pharma-care.

“We need to send a message to investors that they’re welcome in Canada, which means that in the rhetoric that’s used by politicians and by their strategy on taxation, our goal shouldn’t be to create conditions that are unfriendly. We just don’t know on the basis of the announcement made today what sort of plan we’re going to be seeing and that creates greater uncertainty. And unfortunately, uncertainty is the enemy of investment. People want to know what the rules are and what the conditions are and if they’re still going to be operating.”

There’s really nothing that focuses any attention on the economy

“The implications are significant for small businesses. The last thing we need is the prospect of another election at this very moment. As the economy remains really turbulent, having political stability is not unwelcome. The other thing that gives me a little bit of solace is that the NDP has been more outwardly supportive of small business in recent years than was the case, perhaps a decade or so ago. But there’s some pretty big worries from when I look at the list of areas on which there seems to be a meeting of the minds and any concern for the economy seems to be issue No. 5,000 on this list. There’s really nothing that focuses any attention on the economy.”