Burger King’s restaurants in Russia are still open, to the dismay of owner Restaurant Brands International 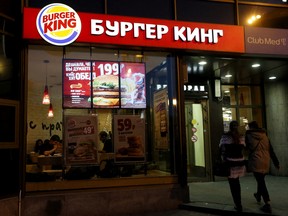 Burger King’s attempts to shut down its operations in Russia are being thwarted by a rogue franchisee in the country, the fast-food chain’s Toronto-based parent company said.

A wave of global consumer brands and retailers suspended their Russian operations or pulled their products in response to the invasion of Ukraine last month, including McDonald’s Corp. and Starbucks Corp. But Burger King’s restaurants in Russia are still open, to the dismay of owner Restaurant Brands International Inc. (RBI).

RBI, which also owns Tim Hortons, said it has been in contact with Burger King’s main operator in Russia, Alexander Kolobov, and demanded he shut down operations at the roughly 800 locations across the country.

“He has refused to do so,” David Shear, president of RBI’s international business, wrote in an open letter to employees on March 17.

Kolobov is the founder of Russia’s Shokoladnitsa coffee chain and has been involved with Burger King since the chain entered Russia roughly a decade ago. For weeks, RBI has been directing its suppliers to stop sending Burger King’s approved products to the Russian operations, the company confirmed in an email.

Burger King’s Russian operations are run through a joint-venture partnership with Kolobov, along with VTB Capital, part of Russia’s second-largest bank, and Investment Capital Ukraine. RBI owns a 15-per-cent stake in the joint venture, but has been trying to divest it, according to the company.

“While we would like to do this immediately, it is clear that it will take some time to do so based on the terms of our existing joint venture agreement,” Shear said.

The company has stopped operational and marketing support for Burger King Russia, and is refusing any request for investment or expansion in the country. All RBI’s profits from the operations “including our ownership stake” will be redirected to the United Nations’ refugee agency, on top of a $1-million donation, Shear said. Burger King is also giving $2 million in free meal coupons to NGOs supporting Ukrainian refugees.

“Would we like to suspend all Burger King operations immediately in Russia? Yes. Are we able to enforce a suspension of operations today? No,” Shear said.