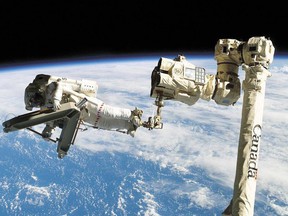 Canada’s famous robotic-arm technology is currently in use at the International Space Station. Photo by MDA

MDA Ltd., the company behind the Canadarm, won a $269-million contract from the Canadian Space Agency (CSA) to embark on the third stage of designing the latest iteration of Canada’s most visible contribution to international efforts to inhabit space.

“This is another important milestone for MDA that demonstrates our ability to execute in the rapidly accelerating global space economy and further reinforces our role as a worldwide leader in robotics and space operations,” Mike Greenley, chief executive of the Brampton, Ont.-based company, said in a statement.

CSA initially gave the contract to MDA in December 2020, after it had announced it was partnering with NASA for its Gateway project, a moon-orbiting outpost that’s one-sixth the size of the International Space Station. Gateway is meant to be a rendezvous point for astronauts embarking on deep space and lunar travel. The United States signed an agreement in 2019 that would see Canada contribute its famous robotic-arm technology, which is currently in use at the International Space Station.

MDA also announced this week that it will supply Ukraine with high-quality satellite images as part of Ottawa’s efforts to assist the eastern European country in its fight against Russia’s invasion.

The company will use its “synthetic aperture radar” (SAR) technology to capture images over restricted areas in Ukraine. SAR satellites can collect images through all weather and cloud conditions, making it useful for tracking troops, vehicles and large weaponry.

The federal government granted MDA special authorization to collect imagery to merge and analyze it with other commercially produced satellite images to provide “near real-time” intelligence reports for Ukrainian government officials, the company announced on March 8.

The share price closed at $8.93 in Toronto on March 9, down more than 38 per cent since its IPO last April.