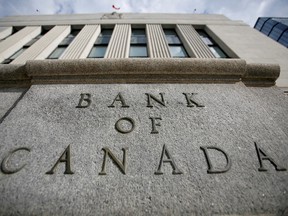 The Bank of Canada building in Ottawa. Photo by REUTERS/Chris Wattie/File Photo

Markets and economists are expecting the Bank of Canada to embark on one of the most aggressive tightening cycles in the central bank’s history as officials race to bring inflation back under control.

In a report Monday, Bank of Montreal ramped up its timeline, predicting Canada will see back-to-back, half-percentage-point hikes at the central bank’s next two policy decisions, beginning April 13. Bank of America Corp. and Citigroup Inc. are forecasting three consecutive 50-basis-point increases. Markets are more sanguine, with just one outsized move priced in over the next two decisions.

The new rate calls represent a marked shift in the outlook for borrowing costs that will take many Canadians by surprise and represent a major test for an economy with one of the highest total debt burdens in the developed world. Steeper expectations were stoked last week when Deputy Governor Sharon Kozicki said in a speech the bank will “act forcefully” to quell inflation, which is now rising 5.7 per cent annually, the fastest pace in three decades.

Perhaps the last comparable scenario was when policy makers hiked rates by a full percentage point at one meeting in 1998 to defend a sagging currency, a move that was quickly reversed just months later.

It will be tricky process, and some economists warn high household debt levels may ultimately prevent officials from moving too aggressively. Still, Macklem may be paying the price for waiting too long to start raising interest rates because of what proved to be erroneous assumptions about transitory inflation.

“The bank must now accelerate lift off because they didn’t take flight when they had a chance to earlier,” Derek Holt, an economist at Bank of Nova Scotia, said by email. “That’s going to cause more economic anxiety than if had they moved earlier.”