But even as the world’s fourth largest oil producer, Canada’s role is going to be limited 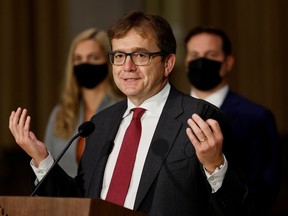 OTTAWA — Natural Resources Minister Jonathan Wilkinson says it will be another week or two before Canada will know with certainty how much extra oil it can produce and ship to help offset bans on the use of fossil fuels from Russia.

But he says longer-term conversations about Canada partnering with Europe on renewable energy are likely more realistic and more lucrative.

Wilkinson is spending most of his time on the phone with G7 partners and energy industry executives hammering out how best to help Europe cut its reliance on Russia as a source of energy.

He spent most of last week at an energy conference in Houston, had multiple calls with U.S. Energy Secretary Jennifer Granholm and on Thursday, a two-hour call with G7 energy ministers. The Ukraine energy minister also joined part of that latter discussion.

“In the context of the discussions, not just with the Americans, but the Europeans as well, we have essentially asked each other, those of us that are oil and gas producers, to look at whatever we can do,” he said in an interview.

Environment Minister Steven Guilbeault estimated this week Canada might be able to increase output by 200,000 barrels a day. Tristan Goodman, president of the Explorers and Producers Association of Canada, said we might be able to do twice that amount “if we’re lucky.”

To replace all the oil it gets from Russia, Europe needs three million barrels a day.

Critics of the government argue the Liberals’ inability to get any new pipelines built have constrained Canada’s oil industry and now we can’t help when there is a need.

Alberta Premier Jason Kenney said last week if U.S. President Joe Biden hadn’t killed the Keystone XL pipeline a year ago, it could have been available to replace Russian oil by the end of this year.

Djokovic in draw at Indian Wells, status still up in air

Djokovic in draw at Indian Wells, status still up in air