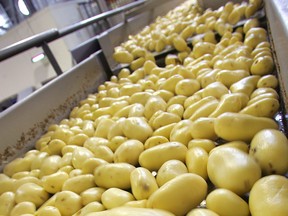 French-fry maker McCain’s decision to stop shipping products to Russia is part of a rapidly growing corporate boycott, which as of this week included McDonald’s Corp., PepsiCo Inc., and Starbucks Corp. Photo by FRANCOIS NASCIMBENI/AFP/Getty Images

McCain Foods Ltd. is abandoning its half-built factory in Russia as part of a global corporate backlash against the invasion of Ukraine.

The frozen french-fry company has been pausing construction since Feb. 24, the first day of the invasion. On Thursday, the company said it has decided to “discontinue the project entirely.” McCain is also suspending all shipments of its products to Russia.

Last spring, McCain announced it was building a potato processing facility in Russia “after 20 years of importing” its products into the country from its other European factories. At the time, McCain said it was investing 150 million euros in the plant in the Tula Oblast region south of Moscow. It was expected to bring 200 jobs.

A spokesperson confirmed by email that the project was in “the early phases of construction.”

“The Russian invasion of Ukraine has been deeply concerning to all of us at McCain Foods,” the company said in a statement. “We are always guided in these decisions by the ethics and perspective of being a family-owned business from New Brunswick.”