Episode 144 of Down to Business podcast 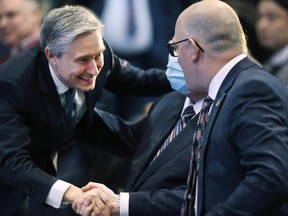 Federal minister of industry François-Philippe Champagne, left, shakes hands with Windsor Mayor Drew Dilkens at a press conference to announce a $5-billion investment to build an EV battery plant in the city. Photo by Dan Janisse/Postmedia

For months, politicians across Canada have been trying to convince an automaker to open a battery cell manufacturing plant and last week, those efforts finally paid off.

It is expected to be an enormous facility — the size of 112 hockey rinks, according to Mark Stewart, chief operating officer in North America for Stellantis.

This week, on Down to Business I delved into the auto sector’s pivot to electric vehicles, one of the largest industrial transformations in history.