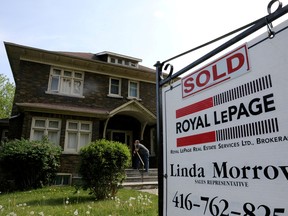 A realtor’s for sale sign outside a house that had been sold in Toronto. Photo by REUTERS/Chris Helgren/File Photo

Ontario is increasing a speculation tax on non-resident homebuyers to 20 per cent.

The tax will also be expanded to cover the entire province.

It had previously been set at 15 per cent and only applied in the densely populated Greater Golden Horseshoe region in southern Ontario.