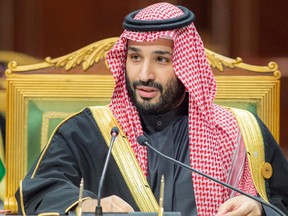 Executives from the Saudi crown prince’s “Neom” megaproject have invited bankers and investors to a meeting in New York next month as they try to drum up international interest in their US$500 billion plan to build a high-tech hub from scratch.

Neom’s chief executive Nadhmi Al-Nasr and finance sector head Layth Al-Shaiban are scheduled to attend the event in early April, according to people familiar with the matter. Invitations were sent to private equity firms, bankers and construction suppliers for the gathering, which aims to gauge interest in the project, one of the people said. It’s potentially one of a series of events in multiple American cities, and follows a similar event in London last year, another person said.

“Explore and discuss the significant market opportunities Neom represents and discuss how we can support your business plans through meaningful partnership and investment opportunities,” the invitation reads, according to a copy seen by Bloomberg.

The invitation says executives will share details on Neom’s “unique vision of urban design,” which includes plans for a car-free linear city, an industrial development that floats on the Red Sea and a mountain ski resort with an artificial lake — all powered by renewable energy — though progress so far is mostly limited to earthworks.