Plant would eventually create more than 2,500 jobs within a key segment of the auto supply chain 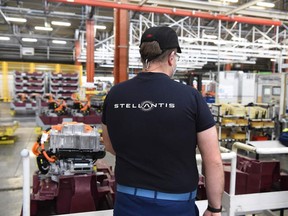 It would stand out as among the largest, if not the largest, investment in the Canadian auto sector in the country’s history and is expected to receive significant, if still undisclosed, financial support from the federal and provincial governments.

The 4.5-million square foot battery plant is expected to support 2,500 jobs within a key segment of the auto supply chain, the battery, which is expected to supplant the internal combustion engine as the single most valuable component in a vehicle over the next two decades.

“The facility is quite staggering … about the size of 112 NHL hockey rinks,” said Mark Stewart, Stellantis’s chief operating officer for North America.

Stewart added the plant is aiming for annual production capacity in excess of 45 gigawatt hours, but declined to say how many batteries per year that would support. The company has said it wants 50 per cent of its vehicle production in North America to be zero-emission by 2030.

“We can all take some solace now that Ontario has got that battery plant in the heartland of auto manufacturing,” said Adams.

Reuters previously reported LG planned to invest US$1.5 billion in the plant and would own 51 per cent of the joint venture; Stellantis would own 49 per cent.

Previously in 2020, Stellantis committed to investing between $1.35 billion and $1.5 billion in a facility in the Windsor area, though a battery plant wasn’t specified.

Prime Minister Justin Trudeau, who was in Europe for a meeting with NATO allies, appeared in a pre-taped video congratulating Windsor and Ontario on attracting Stellantis, which said it would announce a second battery facility — to be located in the U.S. — within the next few weeks.

Messi ruled out of PSG match at Monaco