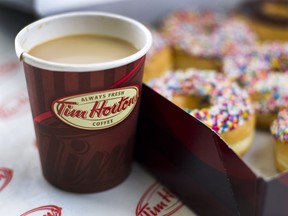 Tim Hortons will open its first location in India this year, with plans to expand to 300 restaurants across the country in the next decade, parent company Restaurant Brands International Inc. said on Tuesday.

RBI has been pushing to turn Tim Hortons into a more global brand since acquiring the coffee-and-doughnuts chain in 2014, with a major expansion into China reaching more than 400 locations in the last three years. In India, RBI sees “one of the world’s fastest growing markets for coffee and tea retail chains,” David Shear, president of RBI’s international business, said in a news release.

The India expansion is part of an exclusive agreement with a joint venture entity owned by Apparel Group and Gateway Partners, RBI said. The flagship location will open in New Delhi this year.

Tim Hortons is entering India, the world’s sixth-largest economy, as Canada looks to strengthen its business ties with the country. International Trade Minister Mary Ng announced last week that she and her Indian counterpart, Piyush Goyal, will relaunch trade negotiations for the first time since 2017.

India’s desire to safeguard local business has also made it difficult for some big western retail brands to enter the market, said Rohinton Medhora, president of Centre for International Governance Innovation, a think-tank. But Tim Hortons may not be seen as a similar threat, he said, because its products are viewed as more high-end or expensive, and therefore not a direct competitor to India’s abundant street vendors who sell coffee and tea.

“Tim Hortons cannot compete with a chaiwala,” Medhora said. “The box stores, it’s the other way around. They have the potential to be way more efficient than the mom-and-pop retailers.”

Canadian Shaedon Sharpe’s NBA moment will come, when the time is right

Canadian Shaedon Sharpe’s NBA moment will come, when the time is right