One thing it won’t be is business as usual, says the Prime Minister 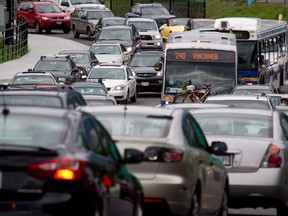 Motorists merge from four lanes into one as they enter the Lions Gate Bridge to drive into Vancouver, B.C. In just over a decade, gas-powered vehicles may be impossible to find in Canada. Photo by Darryl Dyck /THE CANADIAN PRESS

Prime Minister Justin Trudeau unveiled a plan that outlines how Canada will reduce emissions by about 45 per cent by 2030, telling an audience in Vancouver on March 29 that Canada’s approach to the climate crisis could not simply be “business as usual.”

The country will have to show more commitment to climate targets than it has to date. The federal energy regulator predicts that Canada is on track to increase oil production by 1.3 million barrels per day by 2030, which, all things equal, would put more carbon into the atmosphere. Although Canada has an innovative carbon pricing scheme, it has never been able to meaningfully reduce emissions. It is one of the largest largest emitters of greenhouse gasses when measured on a per capita basis.

“If we don’t do this now, it will be too late,” said Trudeau.

Tom Green, senior climate policy advisor at the Suzuki Foundation, an environmental group, said he is optimistic about the plan despite its implicit contradictions. “It’s much more of a comprehensive blueprint than we’ve had in the past,” he said. “The key thing is that this is actually a plan across all sectors and it sets targets, emission levels for different sectors, and then it explains how it’s going to bring them down.”

“Industry likes to talk about ethical oil, but in fact, Canada has one of the highest emissions intensity oil,” said Green. “We definitely shouldn’t be expanding Canadian oil production,” he added. “That is the really disappointing thing in the report.”

It pledges to allocate $150 million to retrofit new buildings to make them greener, and $180 million will go to supporting climate initiatives led by First Nations, Métis, and Inuit organizations.