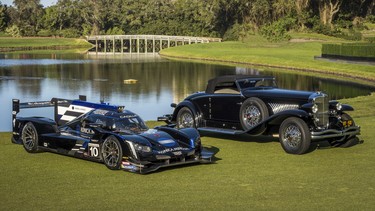 2017 Cadillac DPi-V.R and 1934 Duesenberg took Best in Show at the 2022 Amelia Concours d’Elegance Photo by Hagerty

A 1934 Duesenberg and 2017 Cadillac race car have won Best In Show honours at the 27th annual Amelia Concours d’Elegance, a major show for classic vehicles held in Amelia Island, Florida in early March.

The champion car features a 420-cubic-inch (6.8-litre) V8 engine with dual carburetors, and was rated at a top speed of 185 km/h. It was originally purchased by Marjorie Merriweather Post, owner of cereal company General Mills, and known as the world’s richest woman at the time. She kept the car at her summer house in Long Island, New York until 1962. According to Hagerty, Yeaggy had the car restored to Post’s original specifications.