2022 Preview: The 7 performance vehicles we really want to wheel

2022 Preview: The 7 performance vehicles we really want to wheel 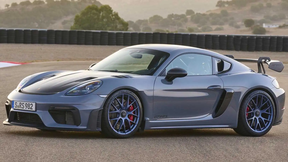 While we’re definitely looking forward to the raft of new supercars due out 2022, several less-extreme but still extremely-sports-oriented machines loom just over the horizon, too. These are the seven with which we can’t wait to get acquainted.

Since launching the Cayman (a hardtop Boxster) in 2005, Porsche has intentionally kept this mid-engine jewel’s performance just a shade under the 911, so as to not encroach on the icon’s status as top-dog Porsche sports car. Well, that notion has been kicked to the rumble strips with the 718 Cayman GT4 RS. Porsche has dropped the 9,000-rpm 4.0L flat-six from the mighty 911 GT3 into the Cayman, blessing it with a screaming 493 horsepower and 331 lb-ft of torque. As with all Porsche RS cara, the seven-speed PDK dual-clutch is the only transmission available.

“We want to party with this car, celebrate this engine, horsepower, RPMs before some distant day where it goes electric,” says Andreas Preuninger, head of Porsche GT cars. Still, the new 911 GT3 is a smidge faster around the ‘Ring than this über -Cayenne, so the Porsche sports car pecking order remains.

Nissan is replacing its aging 370Z with an all-new rear-drive sports car dubbed simply “Z.” It’s a gorgeous thing, drawing numerous styling cues from the original Datsun 240Z of 1970 while looking modern and well-resolved from any angle. Pricing will move up from the current model, as this new Z-car has the six-cylinder Toyota Supra GR in its sights.

The new Z rides on a modified version of the of the current FM platform and retains the 255-cm wheelbase of the outgoing car. Base Zs get 18-inch wheels, but moving up to the Performance models nets 19-inch forged alloys, a limited-slip differential, stronger brakes, and a stiffer suspension.

The Z’s cabin quality is leagues ahead of the outgoing 370Z, showing premium materials, a 12.3-inch configurable digital gauge cluster, modern infotainment, and the Z-signature trio of analogue gauges atop the dash (boost, turbo speed, and volts). There’re real volume and tuning knobs, too. Hatch space looks to be bigger than in the outgoing 370Z.

COVID-19: ‘Rocky times’ ahead as B.C. gears up to go back to school

COVID-19: 'Rocky times' ahead as B.C. gears up to go back to school