If you read the owner forums, it seems reports there allege drivetrain issues with the SUV’s 2.7L V6 mill 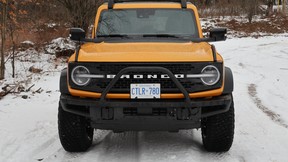 Few would argue that Ford has a bona fide hit on its hands with the new Bronco, a machine which brings the goods to its competition and sells at a brisk pace. However, there are rumblings in some corners of the internet that not all is well in Bronco-land.

According to a list being compiled on the Bronco6G fan forum, a number of customers have been experiencing issues with the 2.7L EcoBoost V6 engine in their shiny new Bronco SUVs. Moderators at the outlet have recorded more than two dozen individual incidents, with some owners suffering through failures of their machine’s replacement engine as well. While there hasn’t been a mass outcry towards a single specific failure point, the term “dropped valve” crops up more than once.

For those of you who may have fallen asleep during Tech Ed class, a dropped valve is exactly how it sounds — an intake or exhaust valve drops out of its seat and rudely intrudes into the engine cylinder. The rapidly moving piston then usually makes contact with the valve, breaking it and causing all kinds of expensive noises which grenades the engine. After all, air compresses well, but metal valve does not.

The root cause for such a failure is rarely the valve itself but can happen if its stem is of poor quality. Other reasons for a dropped valve can be related to engine parts such as weak valve springs failing to do their job properly and moving the valve in a timely manner. Issues with engine timing can also cause calamity, as can excessive abuse by the driver.

There have been just two complaints to the NHTSA south of the border relating to this problem; even the list of 30-odd owners compiled by the fan website represents just a minuscule percentage of total Bronco production.

What your fruit has been through: A green grape’s journey through a global supply chain on edge

What your fruit has been through: A green grape's journey through a global supply chain on edge