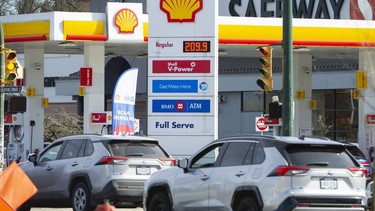 The Shell gas station at Oak St. and King Edward in Vancouver was selling gas for $2.09/litre on Sunday. Photo by Arlen Redekop /PNG

Not only are gas prices at record highs, but a majority of Canadians think these prices are not going to drop back down, and might get even higher.

That’s the word from advisory company Maru Public Opinion, which also found that Canadians believe the top two reasons for the prices are international events — the survey didn’t specify, but likely the war in Ukraine — and petroleum and gas companies that are “just hiking pump costs for greater profit-taking.” Fifty-six per cent of those surveyed thought prices will be going up even more.

Among those considering an electrified vehicle, the largest number live in British Columbia or Quebec — which are among the provinces offering rebates for “green” vehicles. They’re followed in order by those in Alberta, Manitoba/Saskatchewan, Ontario, and Atlantic Canada. Younger drivers, between 18 to 34, are more likely to consider these vehicles. Those with the highest incomes are most likely to want an electric or hybrid car, but next up are lowest-income households — those in the middle are the least likely to consider it. Men and women are equal in their desire to switch to electrified vehicles.