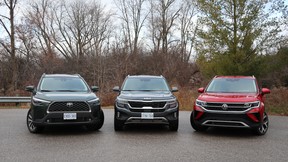 Jil McIntosh: In the hearts and minds of Canadian consumers, compact and subcompact SUVs have pushed aside the humble hatchback and serviceable station wagon. We’ve rounded up three little sport-utes here: the Kia Seltos , Toyota Corolla Cross , and the Volkswagen Taos , those last two all-new. We’re putting them head-to-head to see how they all stack up for performance, price, practicality, and other factors.

We have the top trim level in each, and as-tested, the Kia is $33,245; the Toyota is $33,990; and the Volkswagen is $38,195, all before freight and taxes. The Seltos and Taos have turbocharged four-cylinder engines, 1.6L and 1.5L respectively; the Corolla Cross uses a non-turbo 2.0L engine. How do they stack up for power, Elliot?

Elliot Alder : For such close competitors, the spread is wider than you might expect. The quicker contenders — the Seltos and Taos — wrangle respective corrals of 175 and 158 horsepower, while the Corolla Cross falls between with 169 horsepower. More important to your right foot, however, is torque: 195 lb-ft in the Seltos, 184 in the Taos, and a paltry 150 from the Corolla Cross. The Taos jumps a little too eagerly and the Seltos hustles just right, but the Corolla Cross can barely get out of its own way, let alone comfortably merge on the highway.

JM: Since all of these are intended primarily as entry-level commuter vehicles, at least in their lower trim levels, having a lower power number isn’t a huge issue with me. One thing I like about the Corolla Cross is that it isn’t turbocharged. You get less power, but a simpler engine design, which I like over long-term ownership. However, transmissions are an important part of the drivetrain, and we have some disparity here. The idea behind those dual-clutch/direct-shift transmissions is that as soon as they engage a gear, they get the next one ready to go, for smoother, faster, and more efficient shifts. An inherent issue to the design is that they can sometimes “stumble” a bit, especially when you’re slowing down. There’s nothing wrong with the transmission, but it’s annoying. I seldom experienced it with the Seltos, but the Taos frequently did this.

As for the Corolla Cross, most CVTs have been vastly improved to avoid the noisy, rubber-band feel that plagued the older versions. Toyota has done that with most of its models, but the Corolla Cross still exhibits some of that old-school operation. But enough about what’s under the hood. Let’s talk about the interior.

EA: Inside, these crossovers present very different experiences. The Seltos strives to look modern, with glossy materials, nice textures, and sharp infotainment. The perforated leather seats look particularly nice, and the sum is the most inviting interior of the three. The Taos takes a more measured approach, keeping things quiet and conservative, but arguably more future-proof and functional with the greatest seats-up cargo volume. Seats are excellent and construction is firm, though my 18-year-old Golf used nicer materials than this 2022’s hard plastics. The Corolla Cross feels classically Toyota, with ancient infotainment and materials that don’t excite. It comes in with far more front legroom than the competitors, but with wooden rear seats and just three-quarters as much rear legroom.