The all-electric sedan is blisteringly fast, luxurious and dialled-in 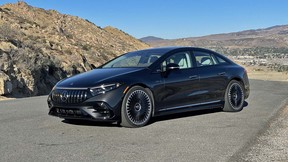 With the automotive world going electric, it had to happen — Mercedes-Benz’ performance arm, AMG, has released its first all-electric ride. Yes, the 2022 AMG EQS 4Matic+ shares much of its makeup with the Mercedes EQS 580 4Matic, but the important aspects have been tweaked to AMG’s sportier specifications.

The two EQS models share a common platform and battery, however, the AMG version has been reworked so it places a stronger focus on performance than it does efficiency. At the heart of the matter is a 107.8 kilowatt/hour battery that delivers a driving range of up to 585-km. The key difference is the battery cooling has been upgraded to deal with the performance side and the ability to pump 300-kilometres of driving range into the battery in 15-minutes when plugged into the right DC fast-charger.

The bonus is it works in the real world. At the start of the drive route the dash was showing 433-kilometres as the available range. At the end of the 271-km drive there was still 179-km of range left in the battery, and the drive was not conducted with an eye to conservation! This not only proves it lives up to billing, it demonstrates the importance of regenerative braking to the overall driving range.

Here, there are a number of regen modes, which are accessed through the paddle shifters. The most aggressive setting mimics a one-pedal drive. I say mimics because at around 5 km/h, it actually stops slowing, which forces the driver to reach smartly for the brake pedal. If AMG want it to be a true one-pedal drive it has to add the ability to bring the EQS to a full stop without reaching for the brake pedal.

The battery powers two AMG-specific electric motors. The front and rear units combine to produce 658 horsepower and 750 pound-feet of torque. However, engage the Race Start mode and the horsepower soars to 750. This gives the EQS 4Matic+ the wherewithal to romp to 100-kilometres an hour in just 3.4 seconds. The caveat is the battery must have an 80 per cent state of charge.

The two electric motors also form a fully variable all-wheel-drive system. The torque distribution is tied into the drive mode selected: Comfort keys on efficiency; Sport and Sport+ bring a rear-biased drive and much better dynamics. To ensure the system is always doing what’s needed, it checks things thousands of times a second. This means there’s a complete lack of drama when all that instant-on torque is being put to pavement in a serious hurry.

A big part of AMG’s legacy has to do with the unmistakable exhaust note the company has made its own. Moving into the electric era, AMG wanted to transition this sound signature into its future EVs. In this case, there are Authentic and Performance audio tracks that play inside and outside the vehicle. Both have three intensity levels — Balanced, Sport, and Powerful. Read quiet, loud, and louder. The intensity of the track also changes according to how hard the accelerator pedal is being worked.

Unfortunately, the new techno-sound can’t hold a candle to the blat and crackle of quad tailpipes. In the end, it proved to be more of a distracting noise than an emotional sound that stirs the driver’s soul. Muting the electronic overture proved to be the golden solution.

How to Repair a Toxic Work Culture