Going back to its oh-so seductive roots 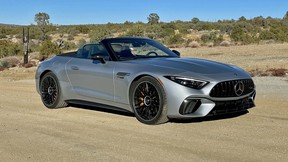 The latest Mercedes-AMG SL goes back to its roadster roots. This time it’s a sophisticated 2+2 soft-top road runner that takes just 15 seconds to get topless, and it can do this at speeds of up to 60 kilometres an hour. It also retains its classic roadster proportions — the hood seems to stretch out ahead of the driver for a time zone!

When it’s launched in Canada this year, the SL will be offered with just one engine — a 4.0-litre twin-turbo V8. This hand-built unit generates 577 horsepower and 590 pound-feet of torque anywhere between 2,500 and 4,500 rpm. The fury is then fired though a nine-speed automatic transmission with a wet multiplate start-off clutch in place of the usual torque converter and, for the first time, all four wheels.

The 4Matic+ AWD system is fully variable and changes the manner in which it splits the power based on the drive mode selected. In Slippery mode it adopts a more even power split to prevent unwanted wheelspin when pulling away on a wet road; in Sport and Sport+ it shifts to a rear-drive bias, but still has power flowing forward so it hauls out of a corner in fine style.

This combination proved to be very fast. It runs to 100 km/h in 3.6 seconds, although this is not where it truly impresses. Keep the hammer down and the SL pulls hard and fast as it races towards its 315 km/h top speed. It is a true test of the driver’s nerve!

Partway into the drive, it dawned on me that this could be the SL’s last hurrah. With the electric vehicle push at full chat, I wondered if a twin-turbo V8 would survive beyond the end of this decade. I sincerely hope so!

While AMG’s all-electric EQS 4Matic+ is a road warrior in its own right, it will never make the owner want to hammer the accelerator to listen to its “crickle-crack” on overrun. The SL is simply sublime in this regard — it made this driver actively seek out tunnels just to hear the exhaust’s glorious symphony echo!

Key to SL’s sophisticated driving feel is the fact the composite aluminum structure beneath the brightwork is 18 per cent stiffer torsionally than the out-going GT Roadster. It is rock solid and so there’s no cowl shake, a side-effect caused when the strength of the roof panel is removed. On the drive route, there were some pretty rough sections of road. In spite of this, there was no shake or shimmy — the SL just hunkered down and drove on as through the road were pristine.

Next up is a trick suspension. The SL is one of the very few cars that does not have anti-roll bars. AMG’s Active Ride Control suspension marries steel springs with adaptive dampers. The active setup not only controls the compression and rebound aspects of the ride and handling, the hydraulics double as the roll control system. It works a treat, as the SL stays flatter than gravy on a plate when pushed to the max through a corner.

This and the aforementioned lack of cowl-shake eliminated the jittery sensation exhibited by many soft-tops when the wheels encounter broken pavement mid-corner. With the SL wearing P275/35ZR21 front tires and P305/30ZR21 rears this could have been an issue. Not here — the SL’s composure under these conditions is confidence-inspiring to say the least!