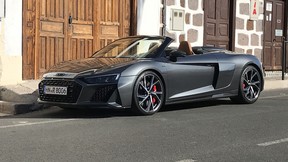 I’m grateful that Audi has partially wrapped this steering wheel in Alcantara. Aside from its soft, almost sensual texture, it provides a slip-free grip for my clammy palms. I’m busting a sweat in the driver’s seat of the 2023 Audi R8 Spyder Performance RWD (say that quickly three times…), but not because it can unleash more than 560 horsepower to the rear wheels on demand. I’m flustered because the roads I’m on thread their way through the volcanic mountains of Gran Canaria, Spain in a dizzying manner, seemingly designed by an inebriated civil engineer. They’re also ridiculously narrow and riddled with blind curves.

Driving at a moderate pace, I ponder the risk of a career-ending encounter with oncoming traffic. Sure, slowing to a crawl would have lowered my heart rate and reduced the risk of getting sideswiped in a turn. But the luscious, naturally aspirated V10 growls provocatively behind me, egging me on. I comply, and continue to perspire.

The R8 actually makes driving the narrow roads relatively easy by reacting accurately and compliantly to my commands. If I need to slow quickly before a blind turn, the optional, massive carbon-ceramic brakes do it effortlessly with a brief, assertive push on the brake pedal. The optional variable-ratio steering (a first on the RWD model) is well-weighted, if a bit muted in feedback, though it reacts with almost telepathic precision. Further enhancing front end feel on the track car is a new, optional carbon-fibre front anti-roll bar, though it’s not available on the Spyder. Now, I did not push anywhere near hard enough on the road to force the R8 to understeer, but I did so later in the day, when we had an opportunity to drive the Coupé at the Circuito de Maspalomas racetrack, located right on the southern coast of the island.

The 5.2-litre V10 doesn’t need the help of a turbocharger, supercharger, or electric assistance to produce 562 horsepower, (30 more than the previous RWD, 40 fewer than the Quattro). It mates to a seven-speed dual-clutch gearbox, which in turn feeds a mechanical limited-slip differential. The power train is capable of launching the R8 from 0-100 km/h in just 3.7 seconds (one tenth more for the slightly heavier soft-top Spyder). It’s also capable of taking the R8 to an unrestricted top speed of 329 km/h — in old-school numbers that’s 204 mph!

I don’t see those numbers at the racetrack, which is mostly point-and-shoot tight, with gently winding straights leading to sharp turns. A couple of relatively fast sweepers and chicanes are thrown in to keep you alert. Here, the R8 really shines, charging hard out of corners on the edge of traction (mostly due to its advanced electronics, and optional 305/30ZR20 Michelin Pilot Sport Cup2 tires that replaced the Pilot Sport 4S tires for the track), and shortening the straights on sheer acceleration. Feathering the shift paddles calls up each gear forcefully, with no delay between my fingers’ commands and the transmission’s reaction.

My notes from the track more accurately tell the story of how this latest R8 feels:

You can push the front deep into the entry of a turn with great feedback, no real understeer I could detect unless it’s forcefully induced. It’s uncanny how well it steers in while hard on the brakes before entry.

Great corner-exit feedback and grip. It drives hard out of turns; you can deliberately coax a rear slide, which the car allows, controllably and predictively — slides are enabled in track-ready Sport mode.

Back on the road, the temperature is just a bit too cool to lower the top on my R8 Spyder tester, but I do lower the rear window to allow the V10’s mesmerising drone to enter the cockpit. The rich exhaust note is an aural delight, especially with the optional Sport exhaust, and remains unmolested, without electronic enhancement produced by the banging Bang & Olufsen sound system.

Law Has a Diversity Problem. Can Start-up Firms Help Fix It?

Law Has a Diversity Problem. Can Start-up Firms Help Fix It?