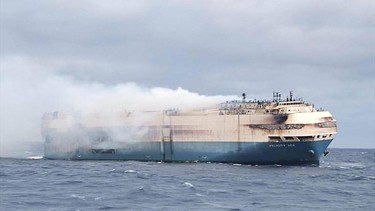 The loss of cargo ship Felicity Ace, a massive roll-on/roll-off car carrying vessel capable of handling just over 5,200 vehicles, has been a major headache for Volkswagen and its associated brands. It sank in the Atlantic Ocean after suffering an on-board fire, taking all vehicles with it. Top brass at VW have now indicated they will be replacing all the machines lost — including 15 Lamborghini Aventador Ultimae hypercars worth about a half-million bucks apiece.

During conversation with Automotive News on the topic, suits from Lambo said, “We are able to replace those cars, so there will be no loss for our customers in the U.S. due to the sunken ship.” This was no small feat for the Ultimae models on board, since they were the final hurrah of that brand’s mid-engine Aventador.