Plus: A U.K. firm has debuted the world’s first all-terrain hypercar, and an Austrian company’s 1,341-hp EV will bow mid-April 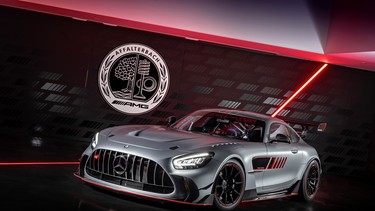 This year marks the 55th anniversary of Aufrecht Melcher Großaspach (AMG), Mercedes-Benz’s performance division, and to commemorate the milestone, the German carmaker has unveiled what has been billed its “most powerful customer sports car.”

The limited-edition Mercedes-AMG GT Track Series packs a whopping 734 hp and 627 lb-ft of torque. There’s one small catch, though — this monster can only be unleashed on the track.

Austria’s DEUS Automobiles has set April 13 – the week of the New York International Auto Show – as the reveal date for its upcoming hypercar. There’s a name for the EV, too: the DEUS Vayanne, after the city of Vienna. The car is being developed in partnership with famous Italian automobile design outfit Italdesign; and Williams Advanced Engineering, battery suppliers for the Formula E grid.