Underdog Nissan has completely overhauled its midsize truck offering — could it be coming for the Tacoma’s crown? 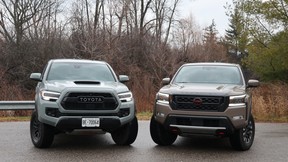 Elliot Alder: Pickup trucks are bigger business than ever, but you can still do a lot with the little guys. The Toyota Tacoma and Nissan Frontier are long-standing segment fixtures with decades-deep roots, enthusiastic followings, and greater might than ever. But where the Tacoma has long dominated with apparent ease, Nissan’s latest entry seems poised for a swipe at the crown.

The Toyota Tacoma has spent years atop the midsize pickup pyramid for good reason. A known quantity, the ‘Taco’ brings shoppers a proven platform, hardy mechanicals, and carefully-packaged organs that make it a darling for workers and off-roaders alike. Conversely, Nissan’s Frontier has spent a lot of time near the bottom of the pile, selling slowly despite some respectable entries. That poor market performance may be set to change, however, with this competitive new effort for 2022.

Jil McIntosh: The 2022 Frontier is based on the basic same frame as before, but lengthened and strengthened. Everything else is new, including its engine. It previously offered a four-cylinder or a 4.0L V6. Now there’s one powerplant, a 3.8L V6 that makes 301 horsepower and 281 lb-ft of torque, which is more horsepower than the old V6, and mated to a nine-speed automatic.

The Tacoma we have is a 2021, but with no substantive changes for 2022, we’re confident pitting them against each other. Ours uses a 3.5L V6 making 278 horsepower and 265 lb-ft of torque, but unique to this midsize segment, you can order it with a six-speed manual transmission, and that’s what we have here. The available automatic is a six-speed as well. Both our trucks are crew cab, which Toyota calls a “Double Cab”; and both are 4×4, which is the only way you can order either of them.

JM: That’s a fair bit of cash, so let’s see how they measure up. They both look pretty rugged, save for that front skid plate on the Frontier, which looks like a knock on a rock could pull it right off. I think a body-colour grille surround would be an improvement too, instead of that big matte-black nose. Both have a damped tailgate that opens to a five-foot bed. The Frontier includes three C-channels with moveable cleats, and its spray-in bed liner is standard equipment. The Tacoma has a scratch-resistant composite bed. It also has cleats, and indentations for adding dividers; its fans are all about packing dirt bikes and camping gear into it.

Both interiors are simple and serviceable, with buttons and dials for most functions. The big thing for me is the seating position. In the Tacoma, the floor is very high and the seat is low, and I sit with my legs stretched out — and they cramp up quickly. Toyota added a power driver’s seat to the Tacoma, and it helps a bit, but not enough. The Frontier has a conventional upright position, and it’s fine for me, but while the steering wheel tilts, it doesn’t telescope. I’ve had taller colleagues complain that this makes it difficult for them to fit comfortably, so be sure to check that carefully when you’re test-driving. Speaking of the wheel, the Tacoma has fairly light steering. The Frontier is heavier, and I found it appealingly “trucky,” but Elliot, I know you didn’t see it the same way.