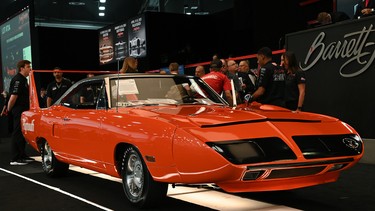 A 1970 Plymouth Superbird led nearly two dozen other vehicles in nabbing auction records at Barrett-Jackson’s Las Vegas sale in early July, with its new owner forking over US$1.65 million for the Hemi-equipped “aero warrior.”

The Tor Red-painted wing car’s numbers-matching “Elephant” motor was its big draw – only 135 of the roughly 1,723 built were so equipped – but its professional restoration certainly sweetened the deal, too. The 426 was backed by a Torqueflite automatic, and that “high-impact” code-EV2 paint outside was complemented by black vinyl guts.

Ford trademarks the name 'Thunder' on its three pickup trucks