This stretched Caddy spans over 100 feet in length 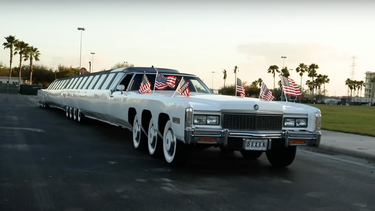 If you were on this planet in the 1980s, you know it was a decade of excess. Conspicuous consumption was the name of the game, and the moneyed set were tripping all over themselves in a perpetual game of one-upmanship. That ethos was on full display in 1986 when a custom shop in California (where else?) rolled out the world’s longest car.

After years of attending shows and undoubtedly snarling traffic whenever it came close to a public road, the 100-foot long limo was put into storage and fell into disrepair. Enter gearhead Michael Manning, the man who bought this car a few years ago from its former owners, and Michael Dezer. The latter holds the keys to Dezerland Park Car Museum in Orlando and helped source funding for the quarter-million dollar rebuild.

According to Guinness, the car is based on 1976 Cadillac Eldorado components. They say that while the car was built in two sections, joined in the middle by a hinge for turning tight corners, it can also be operated as a rigid vehicle. This is a terrifying but fascinating prospect and surely requires an airport runway to execute a successful U-turn. Fortunately, its owners are quick to point out the limo is built to be put on display. There are Cadillac V8 engines in there somewhere, and its owners say it can be driven from either end.