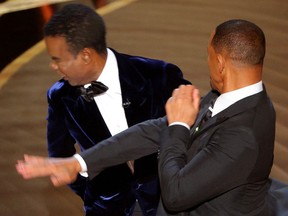 LOS ANGELES — Hollywood’s film academy has started a process that could lead to discipline against best actor winner Will Smith for slapping comedian Chris Rock on stage at Sunday’s Oscars ceremony, the group said on Wednesday.

The Academy of Motion Picture Arts and Sciences also said Smith had been asked to leave after the incident but refused.

Earlier Wednesday, Oscars co-hosts Amy Schumer and Wanda Sykes said they were sickened by the turn of events at the film industry’s highest honors.

“Still triggered and traumatized,” Schumer said in a post on Instagram three days later. “I love my friend @chrisrock and believe he handled it like a pro. Stayed up there and gave an Oscar to his friend @questlove and the whole thing was so disturbing.”

“So much pain in @willsmith anyway I’m still in shock and stunned and sad,” she added. “Waiting for this sickening feeling to go away from what we all witnessed.”

MaryLou Harrigan: Fifty-six per cent of Canadians are concerned about developing Alzheimer’s