FIRST READING: What Trudeau accomplished in Europe (aside from all the photo ops)

FIRST READING: What Trudeau accomplished in Europe (aside from all the photo ops) 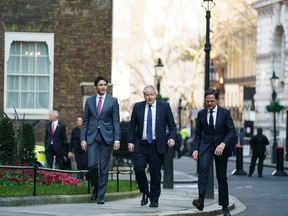 One of many extremely well-composed photographs posted to Prime Minister Justin Trudeau’s social media during his trip to Ukraine. This one has Trudeau walking with calm but resolute purpose next to U.K. Prime Minister Boris Johnson and Dutch Prime Minister Mark Rutte. Photo by Twitter/Office of the Prime Minister

As soon as Prime Minister Justin Trudeau returned from Europe, his official Twitter account posted a All in all, the video wasn’t a great counterpoint to accusations that Trudeau’s whole trip had been little more than a chance to play statesman for the cameras. As Postmedia’s Brian Lilley wrote last week, Trudeau has done “yeoman’s work” on corralling the world into sanctions against Russia, but the prime minister’s usefulness on the crisis seemed to fizzle out as soon as Can Force One touched down in the Central European time zone.

Naturally, the Prime Minister’s Office thinks the whole thing was a tour de force at “convey(ing) Canada’s support to European partners.” In a lengthy statement, the PMO chalked up these successes from the trip …

Think fat and sugar are the enemy? The things that replace them might be even worse