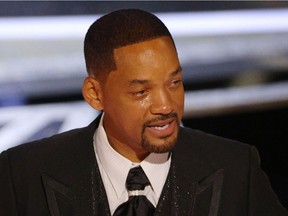 Will Smith cries as he accepts the Oscar for Best Actor in “King Richard” at the 94th Academy Awards in Hollywood, Los Angeles, California, U.S., March 27, 2022. REUTERS/Brian Snyder Photo by BRIAN SNYDER /REUTERS

The lack of a reaction is a testament to Smith’s broad popularity in Hollywood, and his powerful box office cachet, according to some observers.

Another executive predicted the controversy would blow over, noting, “He’s a talented guy at the top of his game … This will be a blip and won’t matter long- or even short-term.”

Smith has anchored such lucrative film franchises as “Bad Boys,” “Independence Day” and “Men in Black.” His films, both live-action and animated, have grossed more than $9 billion globally, according to box office researcher Comscore.

The musician and actor rose to prominence as the twentysomething star of the 1990s NBC sitcom “The Fresh Prince of Bel-Air,” a show that lasted six seasons. It helped launch his film career as an irreverent action hero, and later, his work as a producer of films and series.

Barroom with a view: 95 years of the Monarch Tavern

Barroom with a view: 95 years of the Monarch Tavern