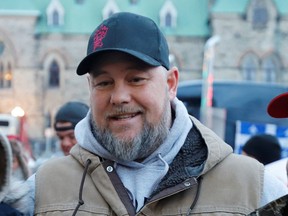 Pat King, who remains in custody at the Ottawa-Carleton Detention Centre, had a virtual court appearance on Thursday. Photo by PATRICK DOYLE /REUTERS

King appeared in a separate court session Thursday from the Ottawa-Carleton Detention Centre, where he has been held since his arrest Feb. 18, part of the mass arrests that brought an end to the three-week demonstration by the so-called “Freedom Convoy.” King was denied bail Feb. 24, with the justice of the peace citing concern he may reoffend and expressing doubt in the reliability of King’s proposed surety.

King apologized for “all this nonsense” at one point Thursday as two different lawyers requested time to speak with him in a private “breakout” session in the midst of the virtual court hearing.

During another court appearance earlier this week, King and his lawyer, Cal Rosemond, both complained about the difficulty they had in contacting each other while King was at the jail.

Dr. Arun Garg: Good health is much more than the absence of disease

Dr. Arun Garg: Good health is much more than the absence of disease